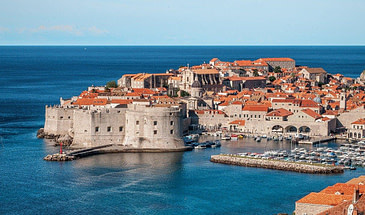 Day 2  - Drive to Sremski Karlovci, small baroque town in Vojvodina province, with sightseeing of downtown, visit to Bee-keeping Museum and wine testing in one of wine cellars that are very common on this area. Continue to Petrovaradin Fortress that is second biggest fortress in Europe, known as "Gibraltar on Danube", built early 17th century. We will enter the tunnel network beneath Petrovaradin Fortress, some 500 meters of more than 20 kilometers of tunnels. Lunch in restaurant on top of Petrovaradin Fortress with view to Danube River and Novi Sad City. Follows sightseeing of Novi Sad City, the second biggest city in Serbia. Back to Belgrade. Dinner in fancy restaurant in Beton Hala area, with live music band. Midnight cruise by boat on Sava and Danube River (with some champagne of course), directly from restaurant to one of top raft-boat clubs in Belgrade, located on confluence of Sava to Danube River with perfect view to Belgrade Fortress. Overnight in 5* hotel in downtown of Belgrade.

Day 3  - Visit to Oplenac Hill with the complex of Serbian Royal Dynasty Karadjordjevic: Museum of King Peter the 1st and the mausoleum of Serbian Royal Dynasty of Karadjordjevic in the Church of St. George. Visit  to Royal wine cellar with wine tasting. Visit to Museum dedicated to Uzice Republic that was the first liberated teritory in Europe in the middle of Nazi conqred Europe in 1941 with WW2 Partizan gun and ammounition factory in tunnels beneath. Visit to memorial complex Kadinjaca, dedicated to WW2 partizans from this area that died in WW2. Quad drive around Zlatibor Mountain landscapes. Dinner on Zlatibor Mountain (special roasted lamb meat). Overnight in 4* SPA hotel on Zlatibor Mountain.

Day 4  - Train ride through Sargan Eight old touristic railway from 1925. It is a narrow-gauge railway that passes through 22 tunnels, over 5 bridges, and overcome the altitude difference of 300 meters. Visit to ethno village Drvengrad (wooden city), built on Mecavnik hill by Serbian film director Emir Kusturica, who won twice Palm d'Or on Cannes film festival. Lunch. Visit to Visegrad Town, located on confluence of Rzav and Drina River, with Turkish Ottoman-era bridge over Drina River, built at 16th century, now on UNESCO list, and touristic site Andricgrad, built in memory of Nobel Prize winning writer Ivo Andric, for a novel about this bridge and story about Bosnian history, menthality and causes of all the problems. Dinner in rafting camp. Overnight in rafting camp.

Day 5  - Half day rafting on Tara and Drina River. With 1300 meters as it’s deepest, Tara River Canyon is deepest in Europe, and second in the world after Colorado. Drina River Canyon is third one in the world with 1000 meters as it’s deepest. Lunch at open air. Transfer to Montenegro. Zip-line in Montenegro, one of the longest in Europe. Dinner on Durmitor Mountain. Overnight in 4* SPA hotel on Durmitor Mountain.

Day 6  - Sightseeing of Ostrog Monastery from 17th century, placed on the cliff high up in the rocky mountain in vertical background, with superb view to plain down below. Drive to Boka Kotorska Bay on Adriatic Sea. Sightseeing of Kotor City with fortified old town, that trace it's origin 2 millennium ago, with beautiful fortress, now on UNESCO list. Private speedboat yacht cruise along Boka Kotorska Bay with stops at the best beaches and small islands. Visit to Sveti Stefan (Saint Stefan) Peninsula, that use to be island with pirate fortress in 15th century, now premium place to be in Montenegro. Transfer to Budva City that is party town on Adriatic Sea. Dinner in Budva. Visit to best bars and clubs in Budva. Overnight in 5* hotel in Budva with casino in which James Bond, Casino Royale film was taped!

Day 8  - Sightseeing of Split City that is second largest city in Croatia, with one of the best preserved Roman imperial palaces in the world (Diocletian’s Palace) from 4th century, on UNESCO list, also used as scenery in Game of Thrones. Wine Tasting in Split City. Private speedboat yacht cruise along Adriatic Sea coast vith stops at some of the best beaches, lagoons and islands in Croatia. Sightseeing of Trogir Town, beautiful medieval town on UNESCO list, located on a small island on Adriatic Sea Coast. Sightseeing of Zadar City that is oldest continously inhabited city in Croatia, situated on Adriatic Sea coast, with world famous Sea Organs, Forum Romanum, Five Wells Square... Dinner in Zadar. Visit to best bars and clubs in Zadar. Overnight in 5* hotel in Zadar.

Day 9  - Sightseeing of Plitvice national park with 16 lakes bound together by magic waterfalls. Beside standard walking sightseeing, we will have a nice cruse on Plitvice Lakes and relaxing drive on the lake side in touristic train. Lunch on the lake side. Transfer to Zagreb, capital of Croatia, and Zagreb city tour with visit to the old Upper town and downtown: St. Mark Church, Stone Gate, St. Stephen’s Cathedral and down town. Farewell dinner in Zagreb. Limousine transfer from dinner to the club (slowly passing bar streets, with some champagne).Visit to best bars and clubs in Zagreb. Overnight in 5* hotel in Zagreb.