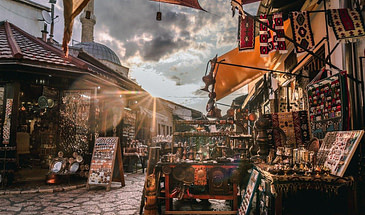 Day 1 – Sightseeing of Sarajevo, capital of Bosnia and Herzegovina, founded in 15th century. Because of its cultural and religious diversity, with Islam, Orthodoxy, Catholicism and Judaism coexisting there for centuries, called the "Jerusalem of the Balkans". Lunch at Vrelo Bosne park on Bosna riverside. Visit to a huge bunker built at the mountain in Konjic Town, the place that was the best kept secret in Yugoslavia, where the leadership of Yugoslav republic planned its atomic war command. It was one of the most expensive structures in the former Yugoslavia. It took 26 years to build (from 1953 to 1979). Dinner. Overnight in Sarajevo.

Day 2- Sightseeing of Mostar City, named after the bridge built on Neretva River by the Turkish Ottomans in the 16th century, on UNESCO list. Lunch on Buna River Spring. Sightseeing of Pocitelj Town, small fortified medieval town from 16th century, with elements of Ottoman and Mediterranean architecture, located on Neretva River. Sightseeing of Medjugorje is a little picturesque place that is known as one of the most famous sanctuaries in the world. The place became known as the sanctuary due to the appearance of the Maria Virgin, which began in the second half of the 20th century. Overnight in Sarajevo

DAY 3 - Visit to the Travnik Town, former seat of Ottoman Turkish viziers (Bosnian governors) from 17th century, with 16th century fortress, and idyllic bridges over Lasva River. Sightseeing of Strbacki Buk Waterfall is a 25 m high waterfall on the Una River. Follows visit to Jajce Town, first built in the 14th century as the residence of Bosnian Kings in medieval ages on the confluence of Pliva and Vrbas River with beautiful Pliva Waterfalls beneath the very down-town. Lunch on the riverside. Dinner. Overnight in Sarajevo.

Be the first to review “Sarajevo” Cancel reply