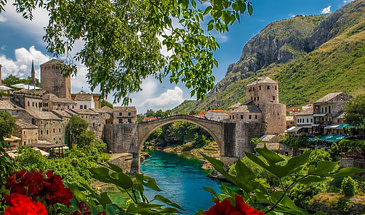 Day 2 - Belgrade City tour, panoramic and walking sightseeing: Belgrade Fortress on the confluence of Sava and Danube River, with tennis courts where Belgrade-born tennis player Novak Djokovic used to train as a youngster. Visit to Saint Sava's Temple, biggest Orthodox Christian church in the world by volume. Visit to Yugoslavia History Museum and Mausoleum of Tito, president of Yugoslavia and leader of Movement of Non-Aligned Countries during Cold War. Lunch in national restaurant in downtown. Visit to Nikola Tesla Museum, that keeps more than 160000 original documents, devices and other personal items as original legacy of this Serbian - American inventor. Cruise on Sava and Danube River. Overnight in Belgrade.

Day 3 - Drive to Sremski Karlovci, small baroque town in Vojvodina province, with sightseeing of downtown, visit to Bee-keeping Museum and wine testing in one of wine cellars that are very common on this area. Continue to Petrovaradin Fortress that is second biggest fortress in Europe, known as "Gibraltar on Danube", built early 17th century. We will enter the tunnel network beneath Petrovaradin fortress, some 1000 meters of more than 20 kilometers of tunnels. Lunch in restaurant on Danube River bank. Follows sightseeing of Novi Sad City, the second biggest city in Serbia. Transfer back to Belgrade. Overnight in Belgrade.

Day 5 - Cruise on Danube River along Djerdap Gorge, the longest (100 kilometers long) and deepest (92 meters) gorge in Europe, where Danube River is the most beautiful. The oldest European urban settlements dated 10.000 years ago were spread around Djerdap Gorge and Djerdap National Park that was established to protect this cultural and nature pearl of Europe. During the cruise we see the remains of Trajan’s Bridge (1127 meter long stone bridge that Roman Emperor Trajan built at beginning of 2nd century), and  the place where he  left a permanent imprint on the rock, known as Tabula Traiana, follows the largest European 55 meter high rock sculpture depicting Decebal the last king of Dacia in early 2nd century. Visit to Djerdap 1 Hydroelectric Power Plant (also known as the Iron Gate), built at 1970’s as the largest dam on the Danube River and one of the largest hydro power plants in Europe. Overnight in Donji Milanovac Town.

Day 6 - Drive to Svilajnac City and visit to Natural History Center of Serbia with exhibition dedicated to dinosaurs, Ice Age animals, world wildlife and geology. Follows visit to Manasija Monastery, fortified medieval monastery and one of the most important monuments of Serbian medieval art from the beginning of the 15th century. Lunch. Follows visit to Felix Romuliana Roman archaeological site on the UNESCO list, that keeps remains of one of best preserved Roman Imperial Palaces in the world, built in 3rd century, that is the place of the last Apotheosis (glorification to divine status) of Roman Emperor, Galerius in 311AD. Overnight in Rtanj Mountain area.

Day 7 - Visit to Zica Monastery founded by Stefan, the first king of Serbia at early 13th century, that was the first seat of the Serbian Archbishopric, and place of coronation of 7 Serbian kings. Lunch in Guca village where is held an annual brass band festival with up to 1 million visitors from all around the world. Visit to WW2 Partizan gun and ammounition factory in tunnels beneath Museum dedicated to Uzice Republic that was the first liberated teritory in Europe in the middle of Nazi conqred Europe in 1941. Visit to memorial complex Kadinjaca, dedicated to WW2 partizans from this area that died in WW2. Overnight on Zlatibor Mountain.

Day 8 - Train ride through Sargan Eight old touristic railway from 1925. It is a narrow-gauge railway that passes through 22 tunnels, over 5 bridges, and overcome the altitude difference of 300 meters. Visit to ethno village Drvengrad (wooden city), built on Mecavnik hill by Serbian film director Emir Kusturica, who won twice Palm d'Or on Cannes film festival. Lunch. Visit to Visegrad Town, located on confluence of Rzav and Drina River, with Turkish Ottoman-era bridge over Drina River, built at 16th century, now on UNESCO list, and touristic site Andricgrad, built in memory of Nobel Prize winning writer Ivo Andric, for a novel about this bridge and story about Bosnian history, menthality and causes of all the problems. Visit to Tjentiste memorial monument of Sutjeska Battle in WW2, 20 meter high carved megalit sculptures. Overnight in Trebinje.

Day 10 - Sightseeing of Sarajevo, capital of Bosnia and Herzegovina, founded in 15th century. Because of its cultural and religious diversity, with Islam, Orthodoxy, Catholicism and Judaism coexisting there for centuries, called the "Jerusalem of the Balkans". Airport transfer. End of program. Departure from Sarajevo.